Today’s Let’s Go Flaneuring post is by Shannon Malia and covers all kinds of territory as she walks us through the journey of air travel with kids.

We glide through security, as graciously as a five-part family with carry-ons and a stroller can, because it is second nature. Because it is what we do.

My toddler girl waddles through the metal detector then stands with her feet spread and arms extended, unprompted. The guard laughs and waves his wand around her miniature body just to humor her. But she is all seriousness because this is what we do.

My preschooler stands on tip-toe at the immigration desk, making the face he knows is pictured in his passport. Little clown, it’s a smirk, and he’s mastered it. My kindergartener shoulders her backpack along with both her siblings’ so we can move along faster. If I am a second slow, she’ll also get behind the stroller to push her little sister. She’s better at this than I am.

In late December, we take our last flight of 2014. To write a clever tweet, my husband counts all the connections we’ve made with our kids in the past year then turns to me with an expression wild: “Seventeen!” I drag my attention away from my girls, who are examining the safety card, to ask him what he means.

“The kids took 17 flights this year!” Wow. This is what we do. This is how we roll from Hawaii to Korea to the Philippines to Oregon to California to Texas to Thailand and back and forth and then some.

I shake my head, grinning. We spend more time in the air than many people spend vacationing in a year. So what has this done to me, to my family? I let my eyes and memory wander around the cabin while keeping an ear bent to the little voices “reading” to me.

Here we are, crammed into a small space with hundreds of other travelers–the only thing in common being our destination. Still, there are several types of airplane personalities.

They stuff their seat pockets with newspapers, spend hours on their laptops typing, and always look refined–even after 13 hours in flight! They appear to be pushing a deadline, so our kids know they can steal a little smile but not an armrest.

Even in mid-day, they can snooze their way from taxi to touchdown. Blessed!

Usually–hopefully–these people are happy! They are either going with anticipation on their faces and packed in their large carry-on tote bags (towels, swimsuits, beach reads) or they are returning with their faces tanned and their same tote bags filled with duty-free souvenirs.

With earphones attached from start to finish, they don’t look anyone in the face, don’t say a word, and don’t seem to be present at all. They have entered “the zone” and will endure the plane ride as a senseless passage from one stage of life to the next.

Maybe it’s their coping mechanism for flying, but these people can talk for the entire plane ride. When seated next to a zoner or business person, the one can feign sleep to gain quiet. However, if two talkers sit side-by-side, there is no end in flight.

Now, this is a Korean word (meaning “grandma”), but she is present in all cultures. She is the nurturing older woman who tilts her head to the side and stares lovingly at children. She offers to carry babies and gives plenty of advice in whatever language she speaks. (We love these women!)

Then there is us: The family

People probably grimace when they sit near us, thinking they won’t get any rest on board. People probably wish my children were older or less talkative or not a risk of spilled soda.

But people also probably admire them for traveling young, for being so far from what must be their home country, for being brave and cute and curious.

We see people in a hurry to go nowhere. They rush on board so they can sit down for a longer amount of time. They race to the bathroom so they can hurry back to their seats to sit down for another long amount of time. They fight to get off the plane first too, elbowing and squeezing and rush-rush-rushing to get to the same baggage claim that we all end up waiting at later on.

We see people irritable and impatient–with each other, with the flight attendants, with their seats, with themselves.

But we also see people who value time, who value interaction, who value opportunity. These are the people who make the flight attendants smile. They read or sleep or work or talk or zone out–but they do it with an attitude of thankfulness. The airplane ride is time and space–even constricted and out-of-their-control–to invest in themselves and others. These are the people who glance at me and my young children with a glint of encouragement in their eyes and whisper a word of praise to our efforts. Even without words, they speak life into the cabin full of caught-together misfits.

We want to be these people too. Even though our destination is the reason we get on board, it is not the only thing that matters. The journey is also important. The journey is also part of our lives, and we don’t want to waste it being rushed or irritable. We see each plane ride as a chance at uninterrupted family time when we get to whisper stories to each other, make crazy art with crayons and stickers, share animated films, play on the ipad, eat ridiculous amounts of snacks, and smile at strangers.

So when we board and settle in, our kids climb up into their seats with the anticipation of enjoying the flight, not begrudging it. They listen to the safety talk (yes, we make them every time), eat their meals, take walks up and down the aisles, watch cartoons, look through the in-flight magazines, play finger games, read, color, and maybe take a nap. And my husband and I? We expect to be–and therefore enjoy–engaging our kids the entire time. We nap when they nap, play when they play, eat when they eat. And as we synchronize ourselves in our five puny cubicles of personal space, our hearts realign and ready us for our next on-ground adventure together.

Each of those 17 planes last year may have flown somewhere different, but every plane ride looked the same to us. So, in a sense, it is another home for us–another place of familiarity and routine. We board, we journey, we land, we journey. Our lives don’t pause when we’re sky-high. In fact, it’s there that we’re trapped into realizing what we really think is important.

Shannon Malia Heil lives in Seoul, but “home” is wherever she is together with her husband and three kids. As a team, they battle jet lag at least four times a year, sample street food, and swim whenever possible. You can read more of their overseas journey on her blog about living cross-culturally, At Home Abroad, or follow her writing via Facebook, Google+, Pinterest, or Twitter.

What I Learned: People Are People Everywhere

*This post is part of a series on learning from diversity called What I Learned. To contribute, contact Rachel.

Today’s What I Learned post comes from Shannon Malia Heil who writes about recognizing the universality of hard and beautiful people.

We were leaving the museum, laughing and holding hands and skipping. My three young children clung to my legs as I unlocked the car and started the (seriously) 10-minute process of loading them in. That’s when I notice the other car–getting ready to back into me and my family.

My family wasn’t moving, so the passenger from the car got out and started to “help” me. Without looking me in the eye, she actually shut one of my car doors and tried to shuffle me out of the way. Infuriated, I spoke up, but it did no good. Gone were the giggling voices of my children as I almost threw them into their seats to save their lives.

Well, it wasn’t that dramatic, but I felt my face grow hot and my hands shake. I felt my teeth grit and my heart beat to the rhythm of war drums.

This culture! This selfish culture! my brain ticked away.

Then: No, that was rude. Sometimes rudeness isn’t cultural. It’s just rudeness.

And I realized that people are people everywhere.

The thought played on repeat in my calming-down mind, and memories came flooding in as the dam of stereotypes collapsed.

A student’s face, wrapped graciously in a hijab, smiling at me as she brought me a gift;

the side-glancing scheming of the bank teller who withheld 20 dinars from our withdrawal;

the stoic but unimposing marhaba of our bus driver each morning;

the unashamed, worshipful, and spirit-stirring sound of hymns in Arabic–

these wash away my blanket memory of Bahrain and replace it with people. 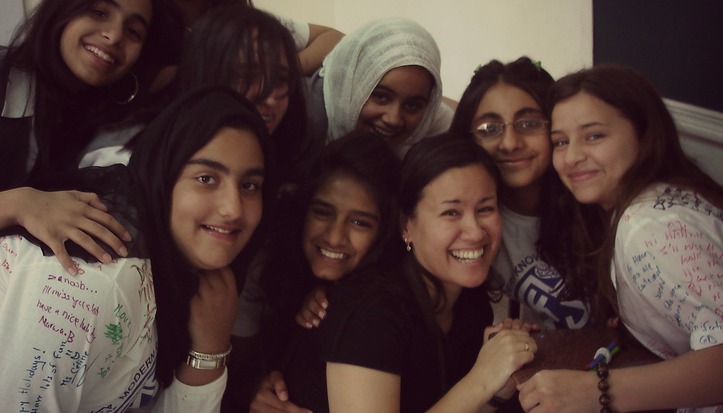 Our favorite fruit vendor, inquiring tenderly about my growing unborn, over an exchange of sour mango;

the harsh handover of fare after a dishonest taxi experience, then stranded;

smiles over shared soup with our language teacher;

polite wais to the building shrine, the beggar beside the businessman–

these spill over my warm recollection of Thailand and replace it with people. 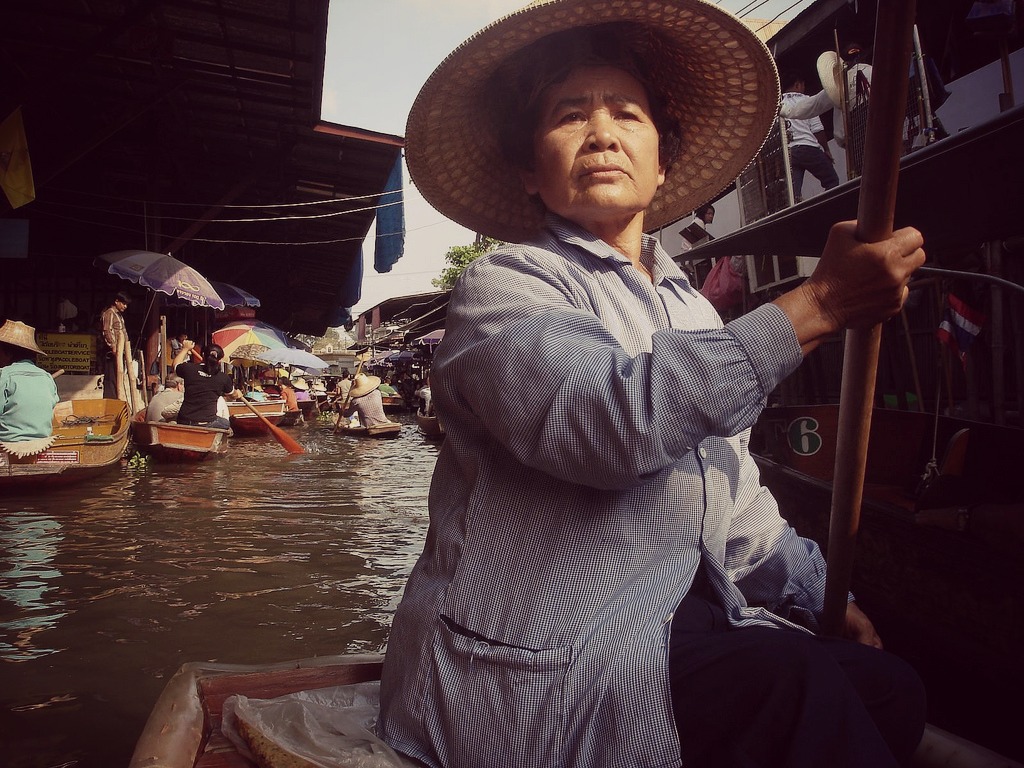 The grandmother who cradled my sleeping daughter on her lap for the hour-long bus ride home;

the teenager who took the last spot on the elevator, leaving us with our stroller to wait;

the store owner who made plastic raincoats for my kids during the sudden downpour;

and yes, the couple who pushed us aside to park in their choice spot–

these ripple through my stubborn perspective of Korea and replace it with people.

Malia lives in Seoul but her home is with her husband and three children–traveling to and from places and in and out of books. Blending the cultures of her life, she dances hula, eats pancit, says “yalla,” and bows her thanks. She writes more about family, faith, and culture on her blog At Home Abroad.

Available from PayHip and Amazon

Djiboutilicious Cookbook: Celebrating Culture and Cooking in a Country as Hot as Your Oven